I finally picked up my long forgotten Waves of Grey shawl this past weekend, determined to finish it. I wanted to work with my hands for the sheer fun of it (no gifts or a project for my store Tangled Loops) and the shawl WIP had been waiting patiently long enough.

I got one little wave done before my toddler woke up from his nap. Not to be forestalled, I brought it into the playroom and started weaving in all the many ends in the back—if I wasn’t going to get anywhere knitting it, I could at least very well clean it up!

Then I got called away to help with dinner prep and didn’t think about the allure of my lovely gold scissors to a rapt little boy watching mommy cut yarn. Ten minutes later, he runs into the kitchen with the baby scissors wrapped around his chubby little fingers and a proud smile across his face. He brandishes a suspicious strand of yarn in his other hand and shouts, “Look mommy! I did it!”

Alarm bells immediately go off in my head and I walk him back to the playroom. I’m hoping he just snipped at the already cut ends I’d left on the couch and asked him if he’d cut into the shawl. No response. Evasive maneuvers. When I asked if he got the yarn from the already cut pile, he gives me an ambiguous yes and runs off. I look at my shawl and it looks to be ok, so I breathe a sigh of relief.

Until that evening, when I pick up my shawl to resume my work and I discover a hole. A very obvious snipped hole. And I start to laugh. Because all I could think of was his adorable pride in doing what mommy did and his vague guilt when he realized he might be in trouble. Besides, as my husband pointed out, I should never have left scissors around him (I definitely won’t here on out)! Silver lining: I can darn the hole and now when I wear the shawl, it will forever remind me of my little guy. 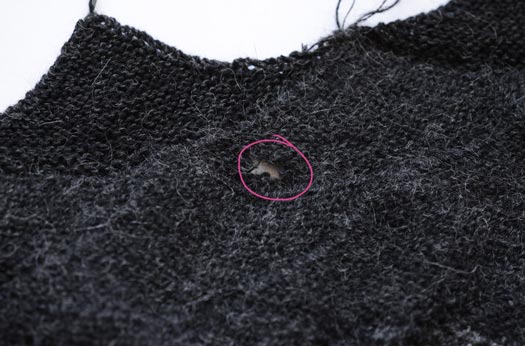 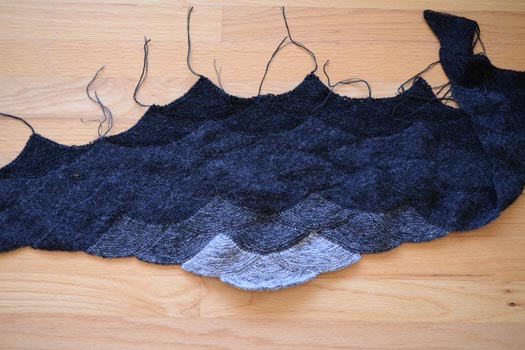 My handiwork—second to last row!

My crafting crew decided to do a weekend getaway for a craftcation in the woods. It was a weekend dedicated to girlfriends and crafts, good food and drink.

We holed up in a delightful cabin, tastefully decorated in hip, mid-century decor, with picture windows to the woods along the Russian River. For our food, we had each signed up to cook two meals or provide beverages and it worked out to be a gastronomic adventure, even with a variety of different dietary requirements amongst us (vegans, gluten-free, etc). One friend noted she hadn’t eaten so much delicious salad in her life.

The range of options didn’t stop at food either. Everyone brought something different to focus on for the weekend—from weaving and decorative mending, painting and sketching (by hand and on the computer), sewing, hair-clip making to, of course, knitting! The weekend was a feast for all senses and I’m looking forward to the next craftcation, whenever that might be.

Some friends and I rented a cabin in the woods along the Russian River in Northern California back in late February (another post to follow with more pics!). We were all getting together purely to hang out and craft the weekend away.

Oh, and drink. Some of the girls came up with a delectable cocktail that got us started off on the right foot our first night there. Slightly fizzy, beautifully colored and tartly sweet—here’s the recipe for the drink I’ve coined She’s Crafty (thanks Katy T. and Laura L.!): 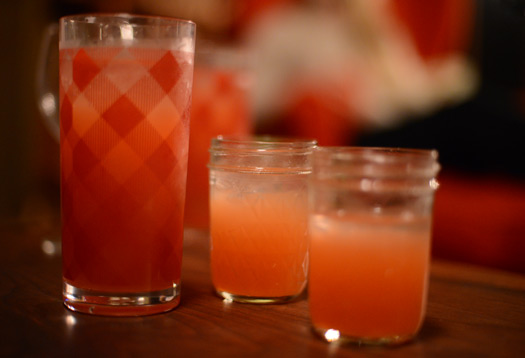 Baby in a Blanket

My sister-in-law sent an adorable photo of the baby in the Baby Blues blanket months ago and I am just now posting the photo (alongside a photo of the finished blanket). 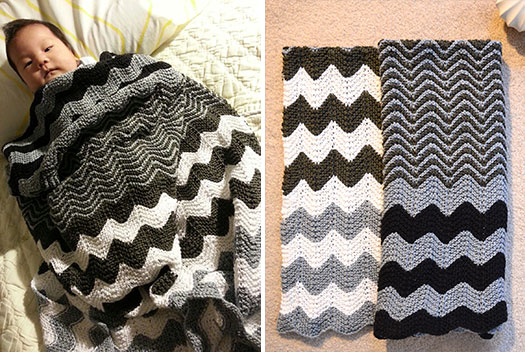 The family went to the Monterey Bay Aquarium this weekend to keep little man D entertained and do a short road trip. I probably hadn’t been there in 10 years and, other than the sea otters and touch pools, had no idea what to expect.

I was stunned by the Jellies Experience exhibit. Otherworldly creatures that pulsed with hypnotic lights and ethereal translucency dancing an underwater ballet—utterly mesmerizing. So much so that I videotaped some particular jellyfish that looked like they were powered by 80’s-neon-colored electricity: 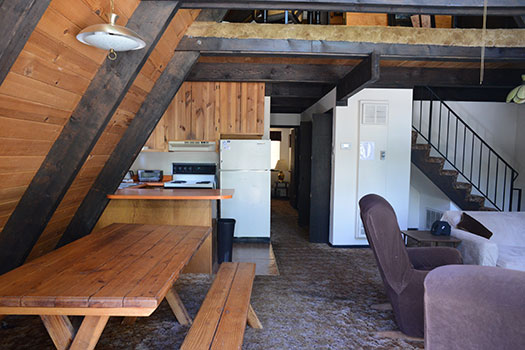 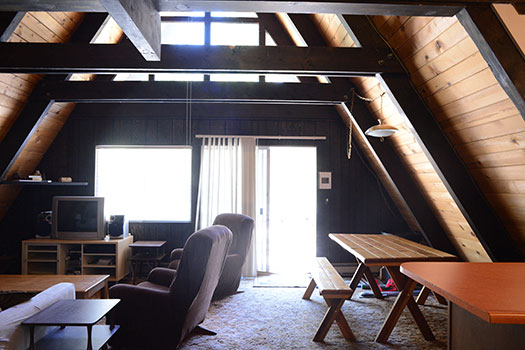 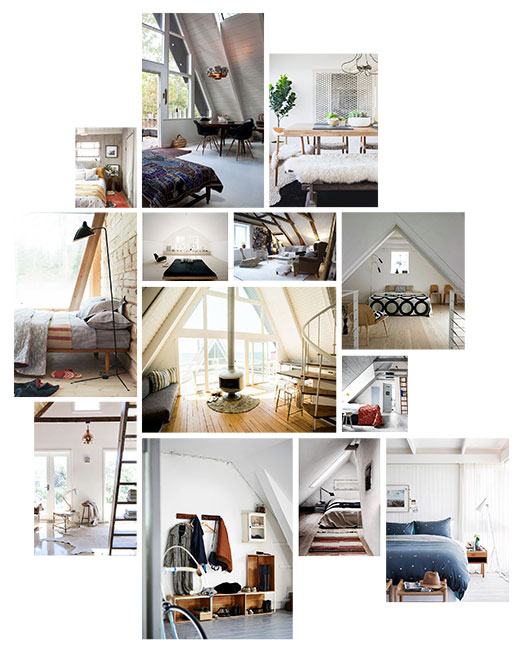 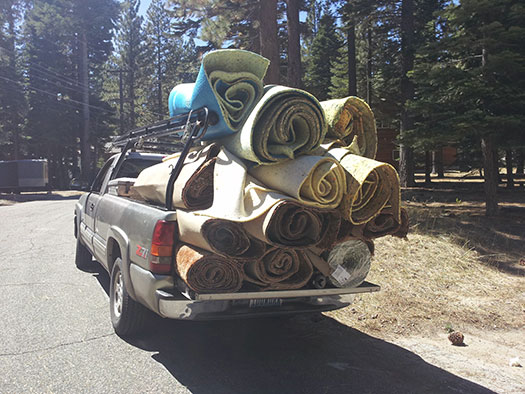 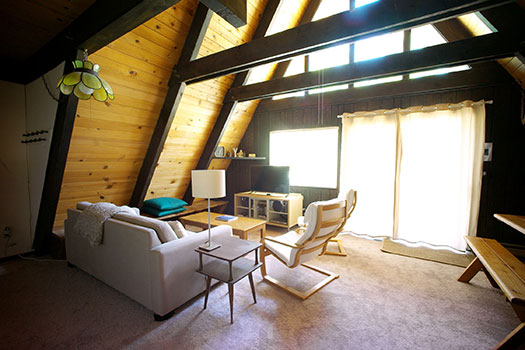 I have a new nephew on his way! Or maybe it’s a niece. But following in the steps of his three older brothers, we all think he will be a he. And when I asked my sister-in-law what she wanted me to knit for this soon-to-arrive baby, she said a baby blanket. I cringed.

I’d avoided blankets—I loved sweaters, liked hats, and occasionally did the odd scarf. Blankets, on the other hand, seemed like such projects of patience with very little interest (at least in terms of shaping).

But, I soon discovered that therein lies the beauty of knitting a blanket—a large expanse of texture and color revealing itself over time. This epiphany occurred after much perseverance.

It became quite obvious that I’d been away from knitting too long when I had to begin the project three times over because of miscounting / misreading the directions / using the wrong needle size for the thread. That last one really hurt my knitting ego. I somehow misread the 6mm (which is a size US 10 needle) for US 6 needles and got a sloppy mess for several rows before I stopped myself to really look at what was going on.

My initial misgivings I blithely ignored (my brain said the knitting would tighten up as I got used to the new pattern). Then those misgivings sank in their teeth, not to be dismissed when my knitting was more netting than a cozy blanket for a baby.

Thankfully, the Chevron Baby Blanket pattern I discovered on Purl Bee was inspiring enough to frog the project three times before getting it right on the fourth attempt.

I chose to work it in a blend of various cotton and linen yarns since this is for a summer (in NY!) baby. And it’s machine washable, of course. Here it is about a third of the way through: 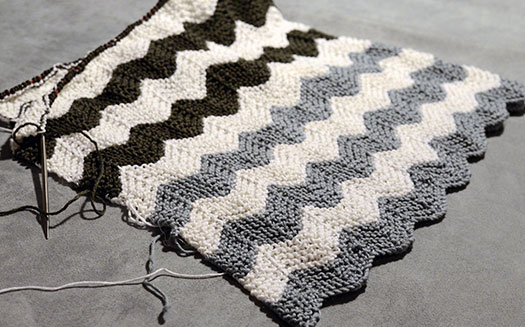 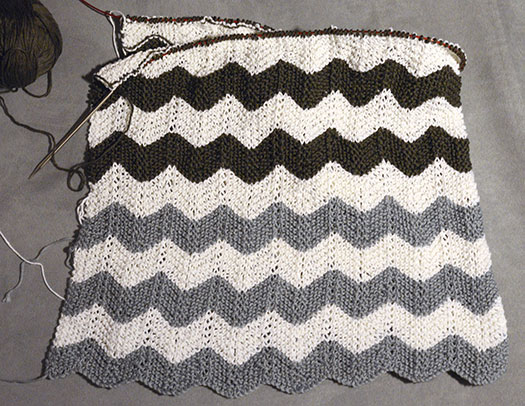 More details to come. But, for now, I’m enjoying the rhythm of this pattern and watching as the fabric develops into beautiful diagonals intersecting with vertical columns created by the increases and decreases.

Weaving in the Mission

Our craft crew took an excursion into the Mission to watch a crafter in action. Specifically, a weaver. Of gorgeous blankets. His name is Travis Melnolf and he constructed his own loom (you can find his plans here for free) and made himself available at Gravel & Gold (a tiny purveyor of crafted goods located in the Mission) on Thursday, July 17th, 2014.

I was unprepared with anything but my smartphone so these photos below will have to do. 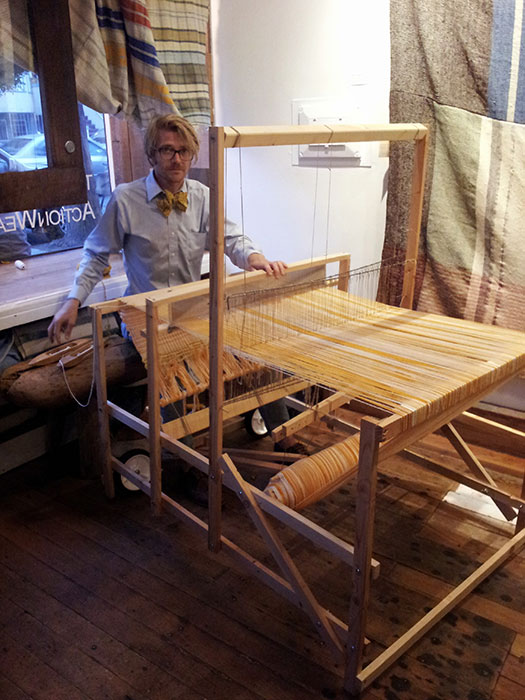 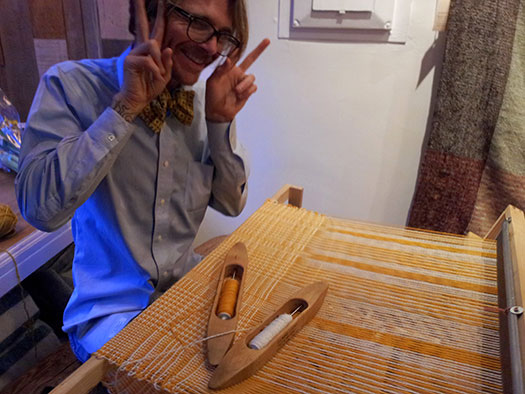 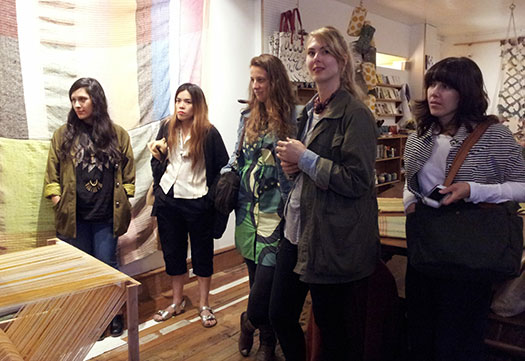 I’d never seen a loom in action so this was inspiring to watch. I was almost tempted to take up weaving. Almost. The trip instead inspired me to finally pick up my knitting needles again! But that story will have to wait for my next post.

I am intrigued with the simplicity of knitting basic shapes and how they can be turned into gorgeous sweaters and cardigans when put together in interesting ways. Brooklyn Tweed’s Inversion Cardigan is one example and the Pimlico Shrug from Knit 2 Together is another.

I found a goldmine of options at Kinokuniya, the Japanese book store, with this book (my rudimentary translation of the title is Square and Circle Magic Knits): 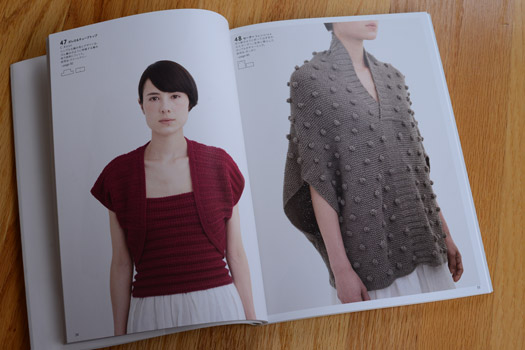 Taking knit squares, rectangles or tubes (for the circle shape shown in the title), this book is chock full of interesting patterns for sweaters, shrugs, hats, mittens, slippers, and scarves. I can’t wait to decipher the charts and tackle one (or more!) of these projects soon!

I have a baby shower to go to tomorrow and it’s the first time I’ve had the chance to knit something girly (everyone I know was or is having boys!). I didn’t have enough time to knit a more complex project and wanted to minimize finishing (buttons anyone?) so I picked a cute bolero pattern from Vintage Knits for Modern Babies. This, along with Natural Nursery Knits, is my go-to for adorable, gift-worthy baby knit patterns. More knitting details for this project (yarn, needles, etc) can be found here. 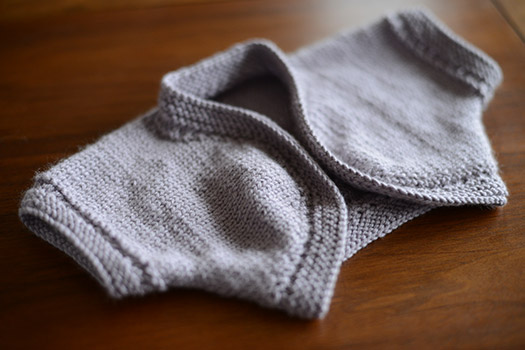